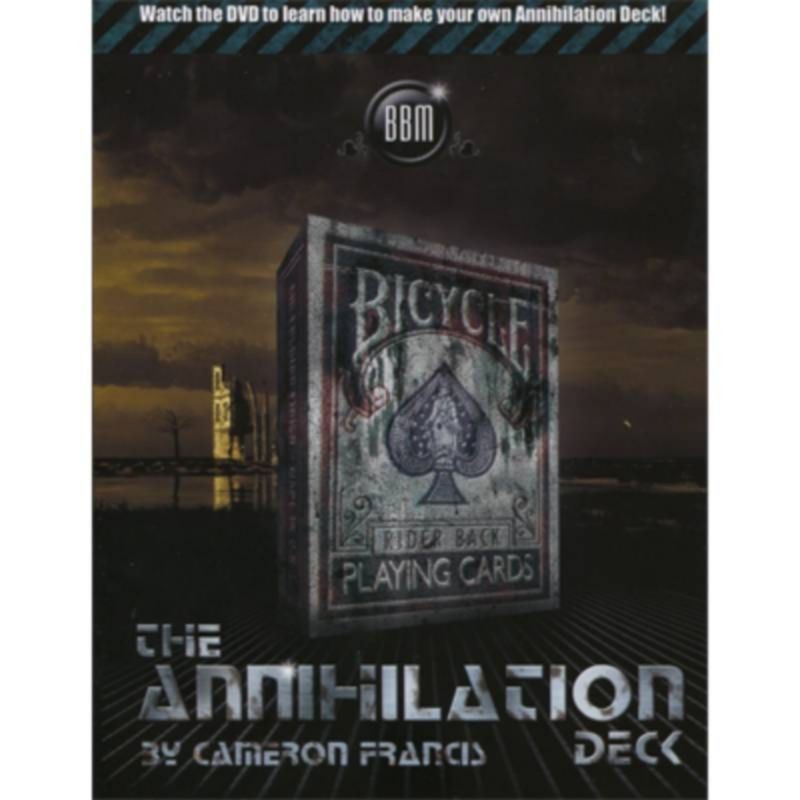 The Annihilation Deck is one of those things that you will take EVERYWHERE. It requires no skill, yet packs a MASSIVE punch. And it's repeatable with a differen

The Annihilation Deck is one of those things that you will take EVERYWHERE. It requires no skill, yet packs a MASSIVE punch. And it's repeatable with a different selection each time, making it perfect for almost any situation. With this deck in your pocket you KNOW you can unleash a brain-melting miracle at any point... and you can relax and concentrate on making your performance scintillating and memorable. The deck does all the hard work for you!

ANNIHILATION
The magician shows a deck of cards and states that it contains two predictions. A card is freely chosen (really!) and hidden. Nobody sees the face of the card (magician or spectator). The magician then runs through the deck and removes his two prediction cards, which he says will reveal the value and suit of the selection.

Let's say the two cards are the Five of Spades and the Queen of Diamonds. The selected card is turned face up. It is the Eight of Clubs - no relation to EITHER prediction. The experiment appears to have failed... until the Five and the Queen are turned face down.

PRAISE FOR THE ANNIHILATION DECK

"BRILLIANT!!!! - After watching the demo, I had to get my hands on the e-book to see how it was done!"
- Stephen Tucker

"... this is a great effect that is powerful enough to be a closer... Two thumb tips way up!"
- Jordan Johnson

And the incredible Card At Any Number effect CONVERGENCE. The magician proposes an experiment in fate as he introduces two decks of card; one red & one blue. The blue deck is placed in front of a spectator and the magician never touches it again. The red deck is removed from its case and shown to have a different number written on the back of each card. A second spectator then names ANY card (Really!). We'll say it's the Two of Diamonds. This card is removed from the red deck. Another card is randomly selected, and the number on it's back is noted (let's say the number is 29).

The spectator now uncases the blue deck. He counts down 29 cards... The 29th card is the Two of Diamonds!

NO gimmicks or duplicates. Both decks and card cases may be completely examined. There is nothing to find!
NO crib sheets or complex charts
NO extra props. Just two decks and that's it!
NO complicated calculations
NO memorization
NO sleight of hand
NO estimation
The cards from the blue deck are dealt FACE UP
Instant reset