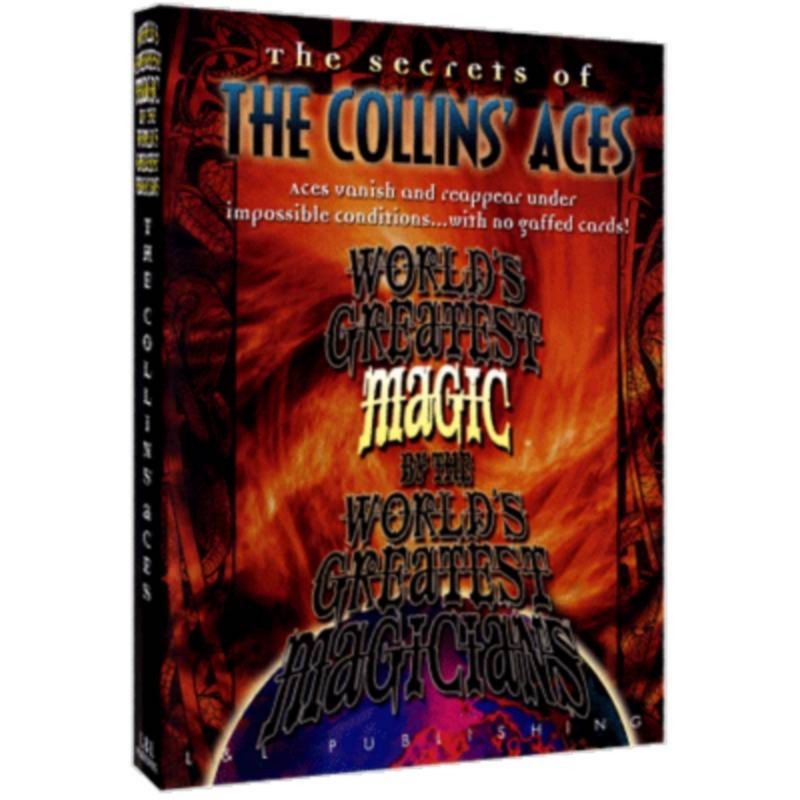 THE COLLINS' ACES In 1912, legendary British conjuror Stanley Collins invented a card trick where the four Aces inexplicably vanished almost in plain sight of the spectators. The trick (versions of which were originally named, alternatively, the Omega Ace Trick and the Omega Ace Trick) immediately caught the attention of the magic world as no gaffed cards were utilized - just an ordinary shuffled deck. Through the years, the trick became referred to by its originator's name - the Collins' Aces - and it still remains a revered part of just about every notable card worker's repertoire.

You'll see six different magicians, each with their own spin on this classic of card magic. Martin Lewis has made the Collins' Aces a featured part of his close-up repertoire for some time, featuring his finale where the Aces are rediscovered after their vanish by simply spelling to them. Martin is here to disclose all of the minute details of his singular handling. Bill Malone is next with his take on Martin Lewis' version of the trick, featuring some great flourishes you'll want to add to your card handling arsenal. Legendary bar magician J. C. Wagner's version features adds an Ace assembly finish to the Collins trick while Michael Ammar has some additional touches on the Martin Lewis version. Alex Elmsley has his own spelling finish that, when it was first committed to video, delighted a room full of very well-posted magicians. You'll find the complete explanation here. To finish, Jim Swain adds a delightful poker deal finish.

The Collins' Aces has become a classic for good reason. It's mystifying for an audience and genuinely fun and satisfying to perform. It's even been said that it's the best four-Ace trick you can do with a regular deck of cards - and you'll find six very compelling and convincing arguments for that position.