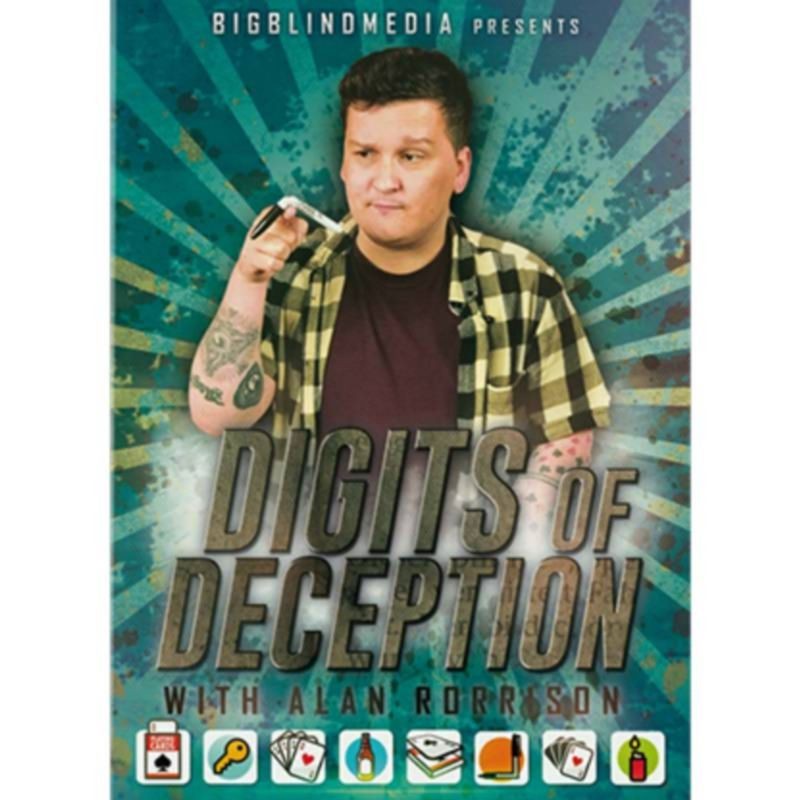 "If James Bond was a magician, Alan Rorrison would be Q!"- Paul WilsonAlan Rorrison is one of the top creative magicians in the UK. With multiple sell-out World

"If James Bond was a magician, Alan Rorrison would be Q!"
- Paul Wilson

Alan Rorrison is one of the top creative magicians in the UK. With multiple sell-out World Tours, TV appearances, consultancy credits (Dynamo & Troy), Magic Castle (Hollywood) and Magic Circle (London) performances, Alan has proven himself countless times to be one of the most exciting, left field thinkers in magic.

Alan thinks like a true modern magician. He uses the props that would naturally be at hand in a social environment - keys, rings, coins, bottles, pens, lighters (plus cards, of course, because we're magicians right?). There's a reason this Scottish born hot shot was consultant for TV stars Dynamo and Troy - he creates magic that connects! It looks real. It feels raw and spontaneous.

Digits Of Deception is a deep dive into some of the most commercial, fun, and just purely magical magic conceivable.

Every routine on this packed two hour project could have been released as a stand alone trick - but Alan has slammed them all together for you in a veritable feast of awesomeness. PLUS he shows you how to make the necessary gimmicks yourself (from easily obtainable bits 'n bobs you'll have lying around), rather than charging you huge, overly inflated sums for making them up as 'ready-made' miracles.

RORY'S RISE - Alan's take on the legendary 'Raise Rise' by Ray Kosby! A signed selection is left sticking out near the bottom of the deck. With just a shake, and in FULL VIEW, the out jogged card disappears back into the deck and pops back out near the top. Another shake and that signed selection is on top! Alan teaches you how to make the ingenious (and ridiculously simple) gimmick to make this miracle all but self working!

KEY THING - A borrowed ring... a borrowed key... and yet, impossibly, you are able to squeeze the head of the key through the clearly too small opening of the ring! Super easy to do - looks like a miracle.

FRIES WITH THAT - The cleanest McDonalds Aces you've ever seen. Four Aces are lost in four packets. One by one those Aces vanish, only to reappear grouped together in the final packet. Then (and this is where it gets good), that packet is INSTANTLY re-spread to show the Aces have gone again. Where? The other cards are spread across the table and the Aces are back (and face up!). Alan will teach you how to make the sneaky gimmick that makes this trick so fooling. It's a STUNNER!

BUD'S BOTTLE - Ready for an impromptu signed coin in bottle? How about with a borrowed coin and borrowed bottle! An impromptu masterpiece. This is CLASS!

STATIC - A selected card sits atop the deck. You rub your forearm (to get some 'static'), and then hover your fingers over the deck. Utterly impossibly that chosen card POPS straight off the deck and adheres to your fingers. It then slowly sinks back onto the other cards. You can even get your spectator to hold THEIR fingers over the deck and watch the selection shoot up as if magnetized. Can be performed impromptu, as Alan teaches you how to make the brilliant gimmick on the fly. Works with ANY deck. Truly shocking visual magic with cards!

SHARPIE BEND - A Sharpie held at the fingertips visibly softens in the center and slowly bends into a right angle. You uncap the strange looking pen and hand it out to be examined (cos it can be!). Learn how to make this fun, visual gimmick in seconds at home!

ACES OUT - A self working, mental miracle. You remove the four Aces from the deck and have your spectators decide on one. When they check the packet of aces, the one they named is GONE! Where? The deck is spread and it's the only face up card in the center of the spread. Oh, and when the spread is reversed ALL THE CARDS ARE BLANK!

BE SAFE - You show the audience your lighter with the regulation 'NO UNDER 18's' sticker glued on. Using your thumbnail under the sticker you demonstrate how a quick snap to the side can actually cleanly remove that warning label. Not a good thing right? So, right in front of their eyes, you throw the sticker at the lighter... and it RE-ADHERES! You hand them the lighter to examine (because you CAN!).