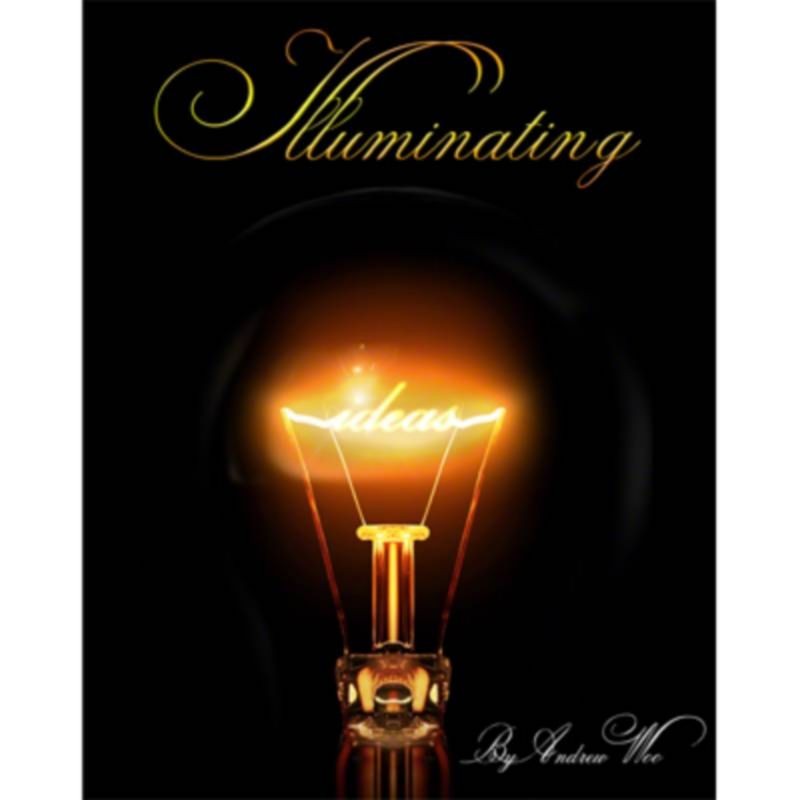 With Andrew's second book completed he decided to put together a themed book. Although this third book is slightly off the beaten path it maintains its entertai

With Andrew's second book completed he decided to put together a themed book. Although this third book is slightly off the beaten path it maintains its entertainment value. The majority of effects require some level of arts and crafts construction.

Illuminating Ideas Andrew Woo, a Toronto magician, is a seasoned performer who was featured in The Linking Rings, in a "One-Man Parade" in 2013. Currently he is a monthly columnist in The Linking Rings publication under the heading "Simple Diversions".

Enjoy his original thinking through various methodologies applied to the Art of Magic. Let's take a look at what Illuminating Ideas has to offer:

Letters from Paris ~ A mentalist effect that utilizes a well-known methodology. However, it is draped in a story about a magician's trip to Paris, France. The effect is brought to life using beautiful Stamps as its medium.

Simply Sight ~ A highly guarded routine is finally EXPOSED!!! This is one of the most dramatic and straightforward person to person messaging systems. There is a built-in security coding procedure that will prevent any keen onlookers from deciphering the methodology.

The Oracle Board ~ Many of us will recognize the "Ouija Board" effect of which this is based. In Andrew's version it is used in a spooky manor to reveal a spectator's selected card. A completely new designed board is included for immediate use.

Nellens Eye Chart ~ Combining an eye chart test with a pick-a-card effect produces a very odd revelation. Everything is included in the book to make the magic ultra visual!

The Mystery of Anrn ~ Is a story about an ancient Egyptian Goddess who passes on to the afterlife. The local community gathers to implement their common burial practice which transforms this card effect into a theatrical piece. A real magician fooler inspired by the late great Dr. Ken Krenzel.

Uno, Dos, Tres Rise ~ Three cards are removed from a small wallet. The backs and the fronts of the cards are cleanly shown. The Two of Hearts now become sandwiched in between two other cards. With a magical gesture the Two of Hearts eerily rises from between the cards. This effect has fooled many magicians due to its clean displays and the use of only a few cards.

Benson Bowl Tribute ~ A stylish routine using a shrimp serving bowl in a classic reinterpretation of a standard cup and bowl effect. You may ask why a shrimp bowl? Take a look at the effect in detail to realize its many advantages.

Super Sized Surprise ~ This is one of Andrew's most favorite kids trick. A common kid's meal box from your local fast food restaurant is the apparatus for telling a story in which the end resulted in a production of food and drink. This effect was once performed for 300 kids and their families to much jubilation.