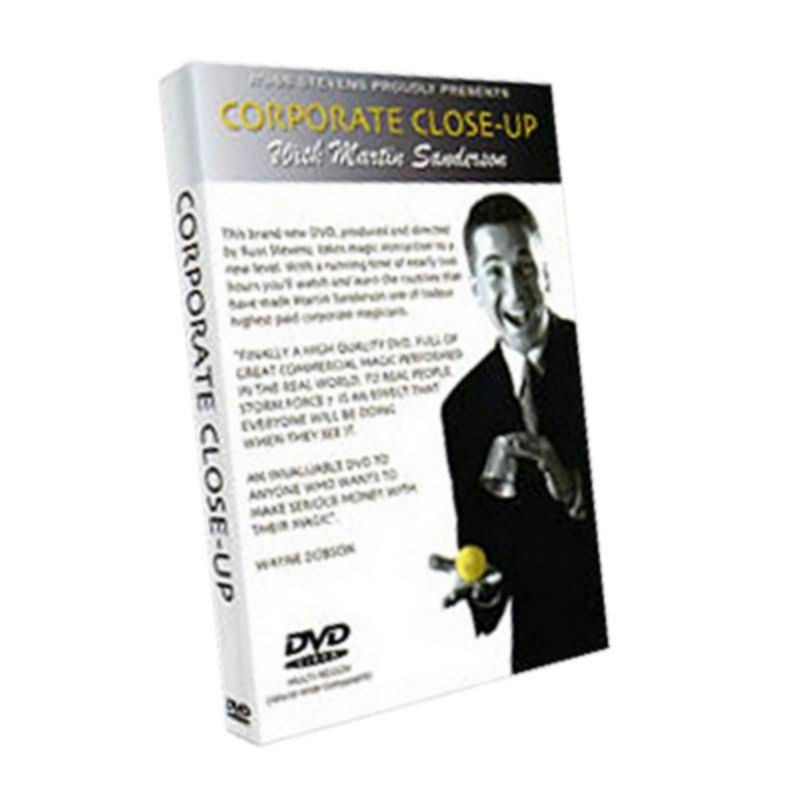 An exclusive video production that takes a look into the world of corporate close-up magic. This brand new video, produced and directed by Russ Stevens, ta

An exclusive video production that takes a look into the world of corporate close-up magic. This brand new video, produced and directed by Russ Stevens, takes magic instruction to a new level. With a running time of nearly two hours you'll watch and learn the routines that have made Martin Sanderson one of today's highest paid corporate magicians.

Ambitious Four Phase Under impossible conditions a signed card appears on top of the deck three times.....then in your mouth....then inside your wallet (inside a sealed envelope) and finally, for the killer finish, it changes into a clear block of plastic on the spectators hand! The ultimate in memorable magic!

Coin Under Watch: Two coins, one is chosen, the other visible vanishes only to be found under the spectators watch! A powerful killer routine with a standard magic prop that you probably already own!

Rapid Fire Chop Cup: Bam Bam Bam, you'll hit them so hard that they'll be picking themselves up for weeks after this one! The most direct routine to date. If you have never performed the chop cup routine in your life, GUESS WHAT....That's about to change!

Think of a Card: The ultimate in opening routines. Perfect for trade shows, corporate events, table magic and reception situations. This routine will quickly establish you as a major player during your opening sequence.

Bill in Kiwi: This one will get you more repeat bookings than any other trick. Every detail is revealed, including some never seen before touches.

Hints and Tips: Martin lets you in on some REAL secrets for securing the best corporate work... and increasing your income!

"Finally a high quality video, full of great commercial magic performed in the real world to real people. Storm Force 7 is an effect that everyone will be doing when they see it. An invaluable video to anyone who wants to make serious money with their magic."
-Wayne Dobson