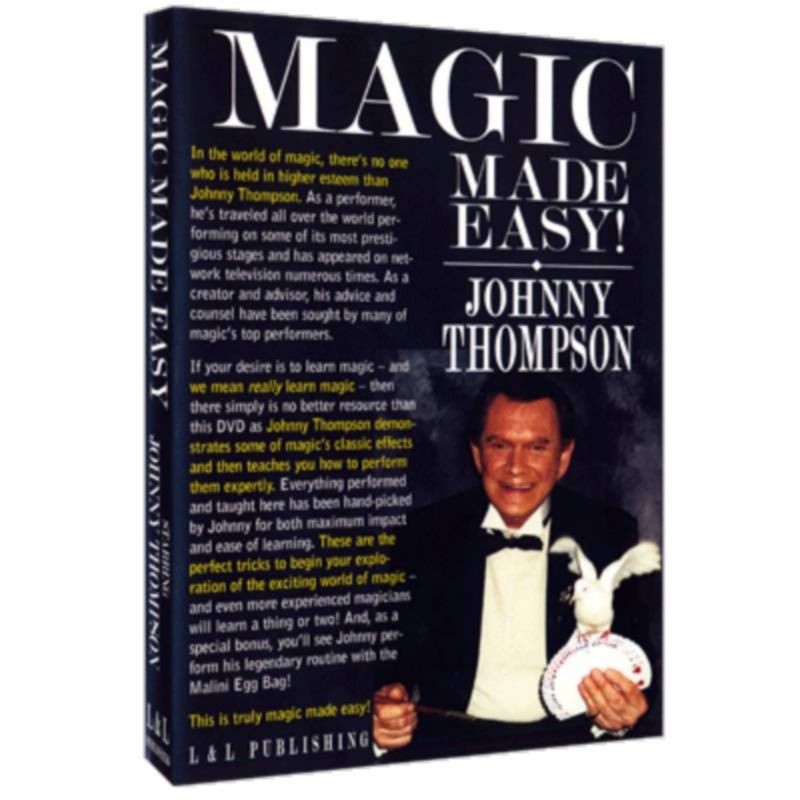 In the world of magic, there's no one who is held in higher esteem than Johnny Thompson. As a performer, he's traveled all over the world performing on some of

In the world of magic, there's no one who is held in higher esteem than Johnny Thompson. As a performer, he's traveled all over the world performing on some of its most prestigious stages and has appeared on network television numerous times. As a creator and advisor, his advice and counsel have been sought by many of magic's top performers.

If your desire is to learn magic - and we mean really learn magic - then there simply is no better resource than this video as Johnny Thompson demonstrates some of magic's classic effects and then teaches you how to perform them expertly. Everything performed and taught here has been hand-picked by Johnny for both maximum impact and ease of learning. These are the perfect tricks to begin your exploration of the exciting world of magic - and even more experienced magicians will learn a thing or two! And, as a special bonus, you'll see Johnny perform his legendary routine with the Malini Egg Bag!

This is truly magic made easy!

Sense of Touch - A shuffled deck is placed into the performer's pocket who then is able to expertly extract the four Aces.

Out of My Hands - Two packets of cards are given to two spectators who shuffle them and select a card. The selected cards are exchanged and the packets shuffled again and though all of this occurs without the performer touching any of the cards, he is able to easily find both selections.

Whispering Queen - A Queen is removed from a shuffled deck. A card is selected and returned to the deck, which is shuffled again. The performer passes the Queen through the deck and then holds it to his ear. The performer then reveals the name of the selected card!

My Card Finds Your Card - A shuffled deck is divided into halves and the performer and spectator each take a card from one of the halves. The cards are returned and cut but when the deck is reassembled, it's found that the performer's card is right next to the spectator's selection.

You Do As I Do - Two packs of cards are shuffled and one is given to a spectator while the other is retained by the performer. Each selects a card and returns it to their respective decks. The performer and spectator swap decks and locate their chosen cards but when they're revealed, it turns out that each has made the very same selection.

Coin Assembly - Four coins are placed at the corners of an ordinary handkerchief. The performer covers two coins at a time with playing cards and causes them to magically travel one at a time until all four have assembled in one corner of the handkerchief.

Dime and Penny Trick - Two coins are displayed - a penny and a dime. The spectator makes a selection, and the magician causes one of the coins to vanish into thin air.

Card Divination - Three cards are freely selected and a spectator is asked to mentally select one. The performer places the cards into his pocket and then proceeds to remove them one at a time until only the mentally-chosen card remains.

Color Divination - The performer is able to psychically divine the color, sight unseen, of a freely-selected crayon.

One Handed Knot - The magician holds a length of rope in one hand and causes a knot to instantly appear in its center.

2 Hands 2 Knots - The performer holds a piece of rope and in one deft move, ties two knots in its length.

Shoe Lace Knot - The performers ties a complex knot in a length of rope and then causes it to vanish with a simple gesture.

Threading the Eye of the Needle - A loop of rope is held in the performer's closed fist yet he is able to instantly thread the other end of the rope through the loop instantly.

Cut and Restored Rope Trick - A classic of magic made easy! The magician asks a spectator to cut a length of rope in its center. The two cut ends are tied together yet at the magician's command, the knot vanishes and the rope is found to be completely restored.

Sugar Cube Trick - The magician causes an ordinary sugar cube to penetrate through his hand, leaving only its wrapper behind.

Mystic Ashes - Ashes are rubbed into the back of a spectator's hand. When the spectator opens their hand, the ashes are now on their palm, having apparently penetrated right through their hand.

Find the Matches - An updated version of a classic swindle! Three matchboxes are displayed, only one of which contains matches. No matter how carefully he watches, the spectator is never able to pick the box with matches, even when the boxes are mixed slowly.

Lie Detector - A card is noted from a shuffled deck and returned. The performer is able to name the card by just asking several questions while feeling the spectator's pulse.

Double Prediction - The performer removes two cards from a shuffled deck as predictions. The spectator is asked to remove cards - as many or as few as he wishes - from random places in the deck and then deal those cards into two piles. When the top cards of the piles are turned over, they're shown to be the mates of the performer's two predictions.

Malini Egg Bag (performance only) - A tour de force performance of one of magic's classic effects. Johnny Thompson is universally acclaimed as one of the masters of the Egg Bag and you'll see his complete routine performed here for a live audience. It's a master class in showmanship!

Besides the tricks, you'll also pick up some expert tips from Johnny as he discusses some of the finer points of how to perform magic effectively with host Michael Ammar.