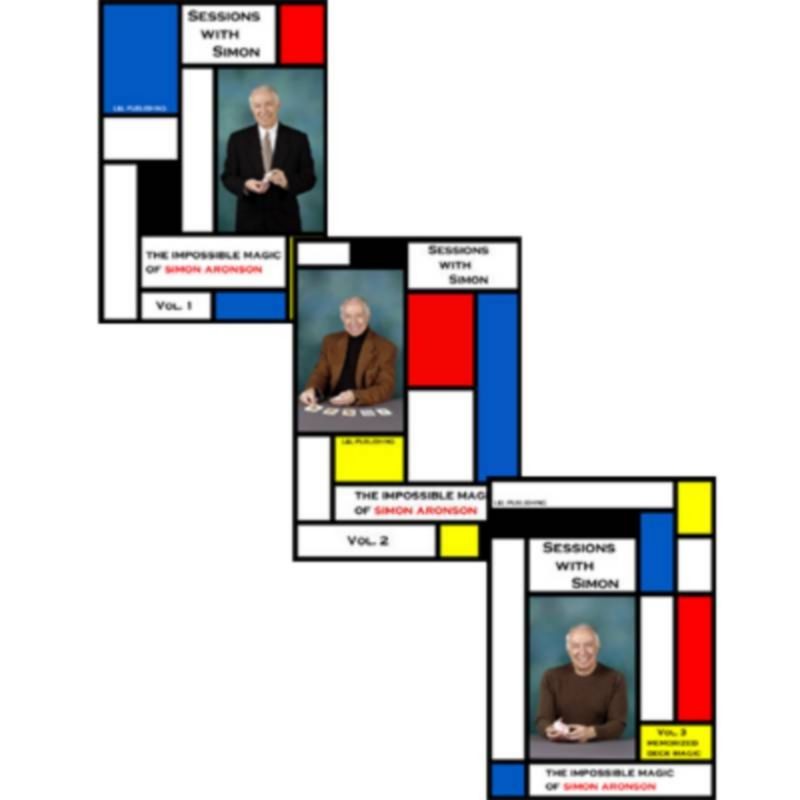 Simon Aronson has been a respected creator of innovative card magic for over 25 years. Combining his strong background in mentalism with his extensive knowledge

Simon Aronson has been a respected creator of innovative card magic for over 25 years. Combining his strong background in mentalism with his extensive knowledge of card magic, Simon has created a host of blockbuster card miracles that aren't knuckle busters! The Aronson approach diabolically blends subtleties, stacks, sleights, mathematics, gaffs, thinking on your feet and much more, to produce strong, clean, impossible looking "hands off" magic that leaves your spectators shaking their heads and uttering, "But you didn't do anything!"

In this Download, Simon has selected his favorite creations for you. The performances are fun, friendly-and utterly fooling. The explanations are done in Simon's typical style: clear, in depth, and full of the tips, subtleties, and explanations of why Simon has chosen a particular approach. It's like a session with Simon that lets you share in his creative thinking.

Bill Malone:
The word 'brilliant' is an understatement when it comes to describing Simon Aronson's wonderful contributions to card magic. Simon's creativity with a deck of cards is surpassed by no one. His methods and thinking behind these gems are way ahead of their time. Now you can enjoy, as I have, many routines that will entertain and fool laymen and magicians alike.

John Bannon:
There are two hallmarks of Simon's tricks. The first is that they are totally fooling. For most of Simon's routines, you just don't stand a chance. The second characteristic is that they are intrinsically interesting. Beyond the actual effects themselves, thinking magicians will marvel at the subtle and devious principles Simon employs. I find many of Simon's methods doubly fascinating - that the method works, and that he could come up with it in the first place.

Juan Tamariz:
I regard my admired friend Simon Aronson as the one magician who has contributed the most to memorized deck work since the time of Nikola. All his tricks are models of analysis, creativity and subtlety.

Darwin Ortiz:
Simon is one of the great minds in modern card magic. His creations can be found in the repertoires of many of the world's best card men, myself included. If you love card magic, you owe it to yourself to study anything he puts out.

Michael Close:
I've used Simon's routines for thirty years to establish a reputation among laymen and magicians. Simon's material is appealing for several reasons: the ingenuity, elegance, and deviousness of the methods; the thoroughness, clarity, and intelligence of the explanations; the economy and directness of the handlings; and the serious amount of butt that these tricks kick.

Steve Draun:
Who or what inspires Simon is beyond me. Although a member of the Marlo group from the start, he has taken a different path. If you are addicted to getting fooled, look up Simon. His magic leaves no clue with which to uncover its diabolical secret.

Dave Solomon:
Simon completely fools me with his creative trick construction, while always being entertaining. These DVD's offer great rewards - fabulous routines, described in minute detail, that you can immediately add to your repertoire.

O'Aronson Aces - Simon's amazingly visual handling of the O'Henry Ace plot, with an engaging poker presentation. At the climax, all four Aces magically land under the spectator's hand!
Among the Discards - A surprising effect . . . about surprise! A card sandwich, including the spectator's freely chosen Ace, suddenly appears where the spectators least expect it - in full view.
Side-swiped - An Instruction Card actually becomes the spectator's signed selected playing card while in full view! Creates an impossible object for the perfect souvenir! Used by top professionals around the world.
Mark-a-Place - An easy utility move, with a host of practical applications. Instantly locate four Queens (or Aces) at any place in the deck the spectator chooses.
Under Her Spell - A humorous vanish and reproduction of four Queens, while taking the spectator on a blind date.
Ringleader - The cleanest, most visual, finger ring and rubber band routine you'll ever see! The illusion of linking and penetration is instantaneous, with no extraneous moves.
Self Control Lie Speller - The performer finds a card which is merely thought of, in a borrowed shuffled deck, without ever once touching the cards! Simon's favorite location.
It's the Thought that Counts (performance only) - Simon and his wife Ginny demonstrate the incredible two-person mind reading act they've performed around the world for over 35 years. You won't believe your eyes and ears-it's that good!

Prior Commitment - Two Jokers appear in the deck and locate two cards freely cut to by the spectators. But you won't believe the surprise climax: the Jokers have predicted the exact location of both spectators' free cuts! Simon's UnDo Influence principle is self-working, but so deceptive that you'll actually fool yourself with this one.
The Calendar Card - The birthday book plot updated, streamlined and with Simon's favorite presentation that plays big enough for the stage! Simon's subtle touches combine with a unique and colorful prop producing a commercial masterpiece.
Head Over Heels - A unique new move that both controls and reverses a freely chosen card - and it's easy to do. Simon explains several applications, including the Invisible Card and an in-the-hands Triumph!
Red See Passover - Simon's classic odd-backed, thought-of card across - a diabolical combination of methods that produces an exceptionally clean miracle with four climaxes! Michael Close says, "Red See Passover is one of the five strongest card tricks you can do for anyone."
Quadruple Spellbound - A spellbound routine with a difference: the coin changes four times! Close up, visual and clean looking magic! The one trick Simon performs most often!
Random Sample Shuffle-bored - Simon's Shuffle-bored has become a classic around the world. Even though two spectators freely shuffle and randomize the entire deck, the performer knows the exact face-up and face-down condition of every card! Here, Simon performs and explains his favorite, and most entertaining presentation! (Comes complete with special foldout prop).
And more ... Simon is known for his intensive explorations of the birthday book theme. As a bonus, he performs and explains Anytime Birthday Shopping (you can carry it in your wallet!) and Fate (the spectator freely chooses any card in the deck before announcing his birth date.)

Simon Aronson is known throughout the world for his pioneering work and writings on memorized deck magic. For over 30 years, Simon's innovative use of this esoteric tool has inspired some of the world's top professionals to recognize its deceptive power.

Now, Simon presents the most in-depth demonstration and exploration ever of this powerful utility. Whether you're a total novice or an experienced practitioner, Simon has incredible lessons, insights, tips and tools to offer. Simon first presents a complete routine of memorized deck effects to show how they can flow together, with unique deck switches that allow the memorized stack to be rung in at any time. But that's only the beginning! In his clear, detailed and humorous way, Simon explains the separate principles of memorized deck magic utilized in his routines.

Starting off with the basics, there's a separate primer for those who have never been exposed to this exciting, arcane tool. It covers all you need to know, from how to memorize, which stack to learn, and how to practice. Although Simon's "Stack to Remember" (the Aronson Stack) is perhaps the most widely memorized stack in the world, Simon doesn't try to push it on you - because this video is for all practitioners, regardless of what stack you might use. (Only two of the effects demonstrated depend on the Aronson Stack, and they both illustrate principles applicable to any stack).

Simon then thoroughly explains and explores a host of basic tools for the memorized deck, including contextual deck switches, the open index, stack preservation, restoration, retained groupings, use of mathematics, restacking a dealt stack, the S.A. Combination and so much more! You'll want to watch this again and again, there's so much information - and so many blockbuster memorized deck effects, including: