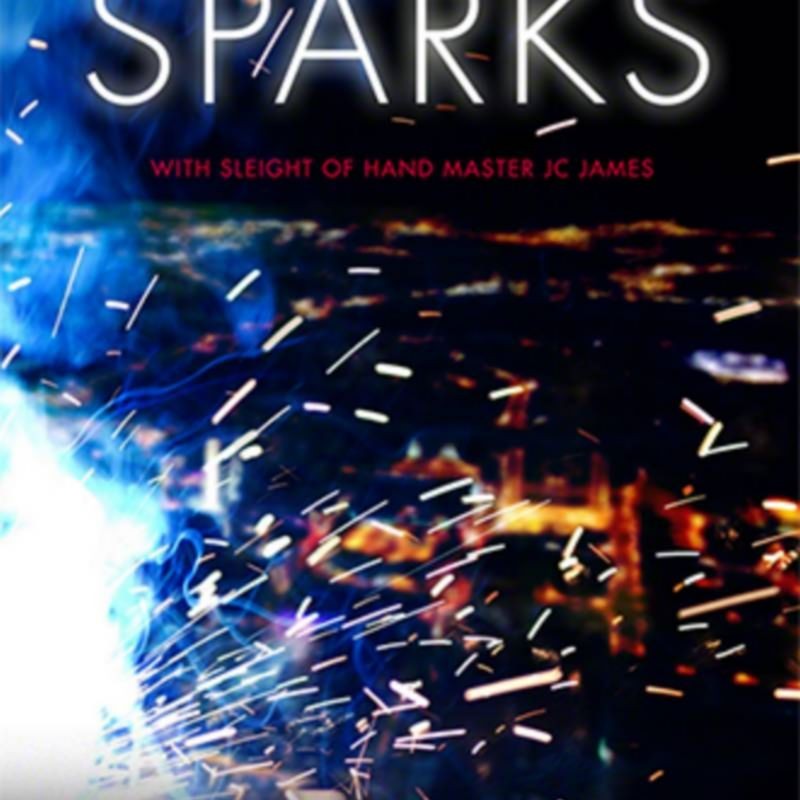 The place: Las Vegas, Nevada. The subject: The very elusive, master of sleight of hand, Mr. JC James. The project: Sparks. The Objective: spark your imagination

The place: Las Vegas, Nevada.
The subject: The very elusive, master of sleight of hand, Mr. JC James.
The project: Sparks.
The Objective: spark your imagination and creativity with a series of impromptu miracles, using rubber bands, coins, cards and dollar bills. Real world, tried and true routines directly from the working arsenal of one of the busiest working professionals in Europe. Here's what you get:

Spin: Cause a borrowed pencil, pen, or sharpie to vanish and appear with a flourish at the fingertips using the incredible new technique. You'll be performing this one minutes after watching.

Latex Slydini: Borrowing from an old Slydini technique, A borrowed rubber band is fairly placed into a magicians hand while his wrists are held by spectators to keep everything fair. When the hand is opened, the rubber band has COMPLETELY vanished only to be replaced by another object such as a dollar bill or a pack of matches or a folded playing card. This can be done NAKED!

POG Production: 4 aces literally jump out of a tabled deck and into your hand with a single touch of an ungimmicked pack. This is a great way to get into a 4 ace routine.

Wave Change: A rhythmic metamorphosis of one playing card into another that happens at chest height. Very easy to perform and looks better live than on camera. Your audience will love it!

ACAP (As Close As Possible): 4 cards are placed face up into four different places in the deck. The cards are squared and tabled. Without any funny business, they are found all together in the center of the deck.

Fake Tilt: As the name implies, this is a version of the tilt that is just as beautiful as it is unorthodox. Includes single and multiple card variations.

CHLAK: A unique 4 for 4 type switch that has both natural timing and a unique aesthetic. Here you'll learn how to use it as a production of a four of a kind, for a collectors routine and for a phone number prediction.

Fan Change: This looks like you're using a gimmick to create a color change of a card held in a fan of cards, but it's completely impromptu.

Clean Transpo: A two card transposition done in a flash. A card held in the hand instantly trades places with the top card of the deck.

Drunken Production: This is bound to be a favorite. Its unique. it's Bold. It's offbeat. An interestingly visual one at a time production of a four of a kind, a crazy interlude then a transformation of the four of a kind into another. If you work behind a table, you would be remiss not to give this a try.

UnSleeve: A novel way to vanish and reproduce a coin using the spectators outstretched hand.

Behind the Force: A clever way to influence the selection of a playing card that will make you smile.

T2P: A very dynamic routine that is sure to get audible gasps from lay audiences. A card is freely selected and signed. The magicians says he will cause the card to travel to his pocket magically. As he waves over the card, slowly it starts to vanish, bit by bit. The magician asks the spectator to say stop. When she does, he removes his hand to show only part of the card is left. The spectator reaches into the magicians pocket and the rest of the SIGNED card is there!