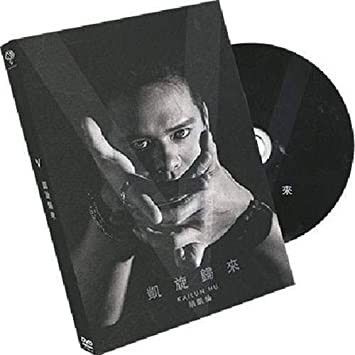 That is, Kai-Lun shares with you Five routines, which are Various and will bring you the Victorious experience in magic performing.

That is, Kai-Lun shares with you Five routines, which are Various and will bring you the Victorious experience in magic performing.

Kai-Lun is one of the top magicians in Taiwan, and he's talented in almost every categories of magic, especially in close-up art. From all his creations in the past 20 more years, Kai-Lun handpicked for you these 5 pieces which are highly entertaining, practical, and magical.

Now, let's follow Kai-Lun to his V-land, where seeing is believing!

I - No more box
The no-box version of the classic Dean's Box effect. Equally amazing but with less props!

II - Co-in Box
The magician throws the playing cards away? With the empty card box, it's show time for the coins, an extravaganza of vanishing and reappearing. However, the playing cards won't be away quietly...What's next?

IV - Bookmark
The probability to predict a selected card from a full deck is at most 1/52, and it's like looking for a needle in a haystack to predict a random phrase selected from a random book by a random audience. "Bookmark" provides a simple and straightforward way for you to challenge the impossible prediction.

V - Holely Monte
The signature of the audience on a card with a punched hole disappeared. Then the hole also disappeared in the blink of an eye. The signed holey card mysteriously re-forms in the envelop put on the table in the beginning. Kai-Lun gives a new touch to the classic 3 Card Monte routine.

Bonus:
Phantom
A super hilarious routine for parlor shows. The magician travels through the space like a phantom. The person on the stage is AMAZED, while the audiences are AMUSED.

Reviews:
"When I performed "PHANTOM" to the magicians from all over the world in Italy, everyone went crazy! If only I could have said, "this is my idea!"." - Lu Chen