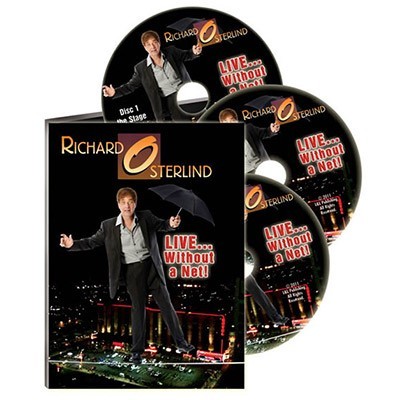 Richard Osterlind Live . . . Without a Net! Richard Osterlind . . . Captured "Live" in Reno, NV! For the first time on DVD, you'll see Richard Osterlind in his natural performing environment, presenting startling mentalism and amazing magic for an audience made up entirely of people who happened to be frequenting a casino in Reno, Nevada.

Richard Osterlind Live . . . Without a Net!

For the first time on DVD, you'll see Richard Osterlind in his natural performing environment, presenting startling mentalism and amazing magic for an audience made up entirely of people who happened to be frequenting a casino in Reno, Nevada.

First, you'll first see him perform a full evening stage show in a comedy club and for the guests at an exclusive after-show party. Finally, you'll witness some incredible street magic-style performances for passers-by in the concourse of the casino! All of the performances on these DVDs were shot without any retakes or editing for you to accurately see what a top pro can do in actual working environments!

Then, Richard, along with co-host Jim Sisti, delves into not only how these amazing effects were accomplished but also the real secrets of what makes this material so effective for lay audiences.

It's all live...and without a net!

Linking Rings - Richard uses Dai Vernon's classic "Symphony of the Rings" as his entertaining opener. He proves that magic and mentalism can be mixed effectively in a performance to win over the audience's approval!

Spoon Bend - Here Richard segues into some of his classic spoon bending techniques to set a more serious tone for the performance. Watch how strong this routine plays for a lay audience!

Mental Epic - Richard uses the standard Mental Epic effect with the Ronnie Gann finish, showing how strong classic mentalism can be. Then, he destroys the audience with his own double-climax ending!

Par-Optic Vision - This is the routine with Richard's Dynamo Deck that recently wowed Internet audiences. A spectator draws cards Richard names out of his own pocket! It looks totally impossible!

Q & A Act - If ever there was a routine that proves you can read minds, this is it! The classic Dunninger routine is presented by Richard with a few modern updates.

The Addition Effect - Richard does the classic Add-a-Number effect using ordinary articles. Again, a classic Dunninger routine is re-created in a modern setting!

Combination Padlock - An original routine by Richard where audience members choose the correct numbers to open a combination lock in a new and novel way. This is a study in routining magic!

Clip Line - A stunning presentation of Alpha-Mental with an ending Osterlind devised over 20 years ago. Just when you think the effect is over, you are hit with an incredible second climax! The audience loves it!

Linking Finger Rings - Richard chose to re-visit his classic handling of this effect for the encore of his show. Watch the stunned looks on the spectators' faces when they see their own wedding rings linked together!

Artificial Intelligence - Richard performs the triple-prediction effect from his book, Mystique, using nothing but three index cards. The handling and effect is everything you could want in a close-up routine!

iCornelius - Richard uses a borrowed iPhone to reproduce the addition effect he performed on stage. If anything, the effect here is even stronger!

Double Penny Bend (performance only) - Richard closes the after-show party with his now famous penny bend done two times! The camera is only inches away from Richard as he bends two borrowed pennies at his fingertips!

Spoon Bend - Again Richard uses his spoon bending expertise to not only astound passers-by, but to also draw crowds over to watch him! See the professional way to handle this type of performance!

Dynamo Radar Deck - Richard recreates his classic Radar Deck effect with his new Dynamo Deck. See how this new prop can handle situations even when spectators make mistakes with their cards!

Dynamo Deck: 3 Cards - A spectator freely chooses three cards from a deck. Richard names a card and the spectator somehow grabs the right one from his pocket! This is repeated three times...and it's freaky!

Spear-It Knife - Richard takes a forgotten classic out of Tarbell, Harrison's Knife through Coat, and streamlines it for a modern audience. If you don't already know the secret of this effect, when you watch it, it will stagger you!

Center Tear - Richard performs his famous Perfected Center Tear over and over again to amazed and dazzled people just passing by in the casino. See why this is one of his most cherished secrets!

Chronologue - For years, Collector's Workshop has been including Richard's personal routine for the Bob Cassidy effect, Chronologue. Now you can see how it plays for an innocent bystander in the casino!

Swami Effects - Richard uses the Swami Gimmick in a variety of ways to guess people's birthdays, read their minds, and predict their thoughts. These clips show why this little gimmick is, perhaps, the most important one in mentalism.

Hypnotic Hands (performance only) - Watch Richard use his powers of suggestion to fasten a teenager's hands together, creating screams of delight! Although not explained, watching this routine will teach anyone the right way to make hypnotic suggestions.