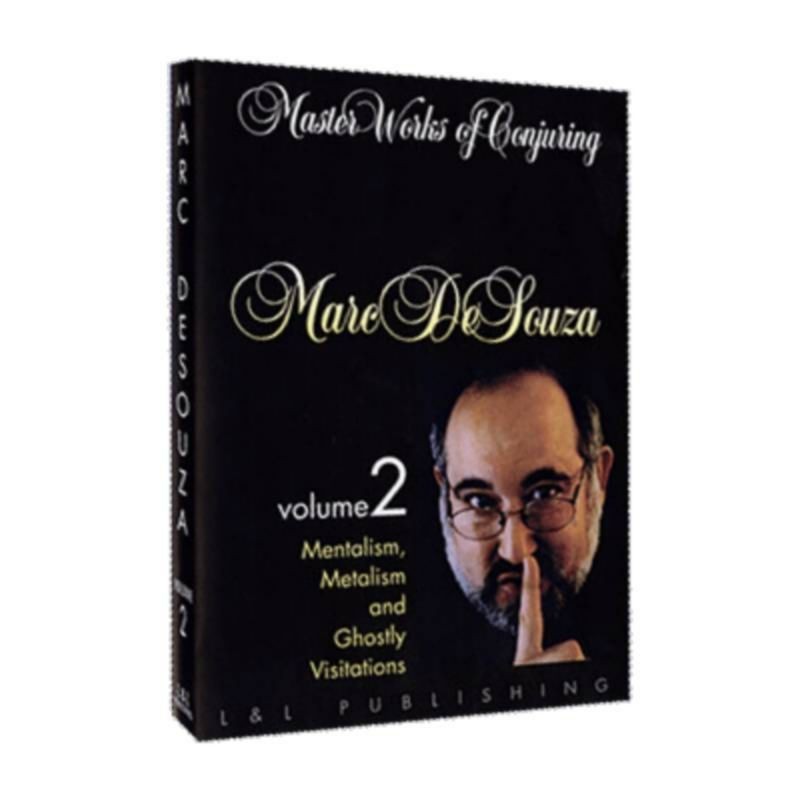 Marc DeSouza has an international reputation in the magic community, having won some of the most prestigious magic competitions in the world. These prizes inclu

Marc DeSouza has an international reputation in the magic community, having won some of the most prestigious magic competitions in the world. These prizes include three First Place wins in stage and close-up magic competitions from the Society of American Magicians and three silver medals from that same organization. Additionally, Marc is a three-time gold medal finalist in stage magic at the International Brotherhood of Magicians competition and won first place in close-up magic from them as well.

This set is a departure from what you have seen Marc do. This is the material that he has used to entertain lay audiences all over the world. These are fully routined and scripted presentations that come right out of Marc's performing repertoire and are a unique offering in the world of magic-real performance pieces that stun audiences. If you are looking for the latest card moves, these aren't for you. However, if you're looking for fully crafted magical presentations that you can adapt to your own performance style, look no further. Every detail is here; not just tricks, but the thinking that goes into the creation of magical masterpieces.

Whether you are a close-up, parlor, cabaret or stage performer, there is certain to be something of real interest to you here-classical magic brought up to date, stunning mental magic, and brilliant story-telling. You'll enjoy and be inspired by the performances. Then, you will learn the real secrets behind these Master Works of Conjuring, most of which are being shown and taught here for the very first time.

NEWSPAPER PREDICTION - A killer method for a classic effect. A double sheet of newspaper is torn to pieces. The pieces are eliminated by a participant from the audience in the fairest manner possible. They bring their finger down onto the center of the piece they are holding and read aloud the word beneath it. An envelope which has been held by an audience member through all of this is opened and a digital recorder is removed. They turn it on and the word is revealed. So clean...and so devious!

UPC OUTDONE - The bar code gag has been used often since its creation in the 70s, and it was usually just a gag. Now there's a real payoff where an item is selected in a very free manner and finally revealed in a large, very visual, prediction. The real work on a great commercial effect for mentalists and magicians alike.

MOTHER OF A WALLET - This is the final effect that Marc uses in his multi-phase book test routine and it's a brilliant, hands-off approach that provides the definitive culmination for any book test. A book is opened to any page and a word is merely thought of. The performer writes down his impression of the word and places it aside in full view. Another audience member is encouraged to try and read the first participant's mind, but, usually, to no avail. The performer comes to the rescue by revealing the word he previously wrote down.

BABY HUGH-Y - One of Marc's personal favorite routines. He destroyed a room full of magicians at the 2008 4F convention with this. In fact, several pros asked him not to release it so they could have it exclusively. It starts out as the classic Baby Gag, but goes on to a real payoff that is unexpected, hysterical and a real fooler. This one is worth the price of the whole set.

LINKING FINGER RINGS - There have been many versions of this classic effect, but none so clean and fair looking as this. It combines a number of known ideas, but the addition of a Tim Conover idea takes it to new heights. Marc uses the Joe Porper version of the Himber Ring and he teaches his handling with that set, but also teaches it using the more standard Himber Ring.

GHOST BOX - It starts with Dean Dill's Box, but that's only the beginning. This 11-minute presentation is about a real haunted house. In fact, the box Marc uses was crafted from wood that actually came out of the house. The routine begins with Dean's sequences (which are not taught) using drapery tie-backs, a candle snuffer and a napkin ring. Then, knotted napkins untie themselves, first behind closed doors, then in full view, with the doors of the box completely open. The routine culminates in a book test with a pair of slates. The selected page vanishes from the book and appears between the slates, but the selected words are written on the slates as well. This is practically an act in itself.

FLOATING TABLE (performance only) - A wonderful presentation for Losander's fantastic floating table. This is a seven and a half minute, fully scripted performance based on the history of spiritualism. The moment when the table floats is so unexpected that it often elicits screams from the participant.