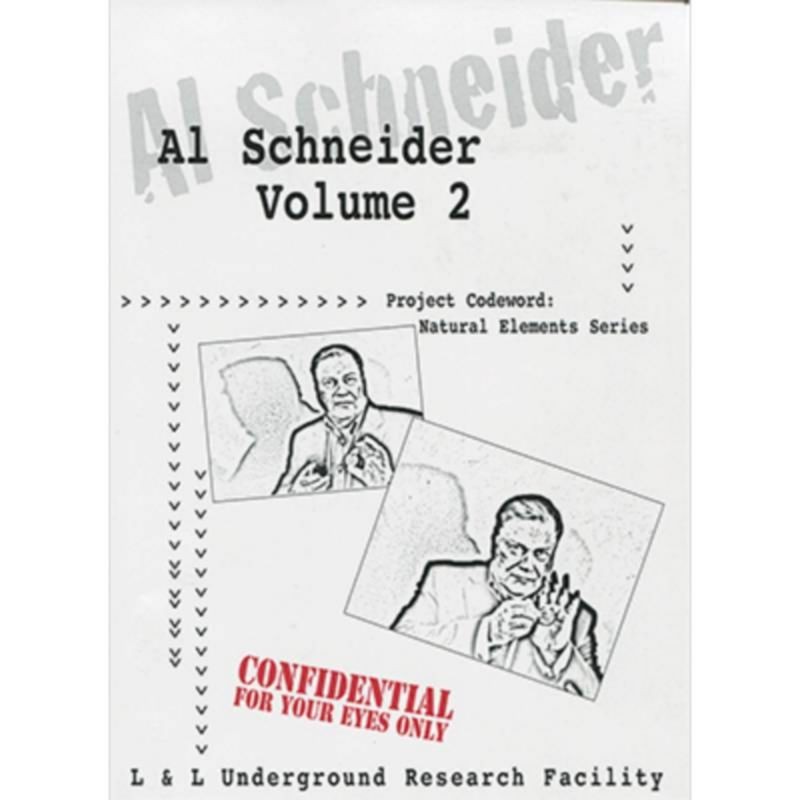 Research in this download is dedicated to locating routines that do not use gimmicks. In general, one can carry some simple props or even borrow something

Research in this download is dedicated to locating routines that do not use gimmicks. In general, one can carry some simple props or even borrow something from someone to accomplish miracles. Though the props are simple, the experiments presented here are about high complex and advanced logic. There is some new stuff, some old stuff, and some new twists on old stuff - but it's all natural!

Heisenberg Routine 2 - This is a takeoff on Al's standard Coins Across routine. It is designed to use the Max Al Ping Chen sequence. In addition, this experiment studies the use of a standard finger palm and the Al Schneider Snap Back Move to accomplish the Pop-Up sequence.

False Start - This is an experiment to use a false count and simplified handling to cause a card to disappear and appear in a ribbon spread of cards. The spectator selects a card and places it with a small packet of indifferent cards. The card vanishes from the packet and appears suddenly when the main part of the deck is ribbon spread. This is a trick done with a normal, shuffled deck of cards. Double effort is invested in convincing the spectator the card really has vanished.

Excalibur - In this copper/silver exchange routine, only two coins are used: a copper and silver. The trick is structured so that the routine can be done in the spectator's hand without the heavy-handed coaching normally done with tricks in the spectator's hand. The handling is very clean and very direct. Carry two coins and do this effect anytime.

Spell Switch - A very normal red and blue deck is used. Cards selected from each deck change places. The effect is repeated. The method is so deceptive, you won't know how it works when you perform it.

Ring and Pencil - This effect must be included with any set of tricks not using gimmicks. A ring is placed on a pencil. A spectator holds both ends of the pencil. The ring disappears from the pencil and appears on the performer's fi'ger. This is a guaranteed audience pleaser.

Pop Thru - This goal in this experiment is to apply the Pop-Up Move to Coins Through the Table. The result is a very clean demonstration of solid through solid using only three coins. Each coin is clearly and slowly placed into the hand above the table. That hand slaps the coins onto a table and one falls through. This is repeated with the other two coins.

Special Export 2 - Special Export 1 modified to use natural coins and the new Max Al Ping Chen move. The result is a practical, quick and flashy Coins Across routine that startles even the most experienced magician. Good for walk-around.

Quick Card Tricks - What do you do when you pick up a deck of cards? Here are three very nice magical card flourishes. Two of these are quick card changes. In the third, a card just disappears.

Sparrow 2 - This is an extension of the Sparrow 1 Coins Across routine from the first volume. It keeps the handling simple while eliminating the gimmick used. Three coins jump from one hand to the other hand one at a time. Simple and direct.

New Off - This is an updated version of Off from Al's previous download set. In this routine, a finger ring is threaded onto a short piece of rope and simply falls off. This is repeated three times. In this version, both hands are shown empty before the ring falls off the rope.

Clipper - Four half dollars are placed on the table in a square pattern. Two dollar bills are placed on two of the coins. In three moves, three half dollars move under one of the dollar bills. The handling on this is very clean. It is somewhat like Sympathetic Coins. However, the handling is very direct and magical. You can move slowly and the spectators will still shake their heads wondering what just happened!

Bottoms Up - Three sponge balls are placed under a table one at a time. Each time they pop up through the surface of the table. No gimmicks or extras. It just looks like magic. This is one you will do.

Matrix - This is the classic Matrix presentation by Al Schneider. Four coins are covered with four cards. The coins are not touch but all the coins magically travel to under one card.