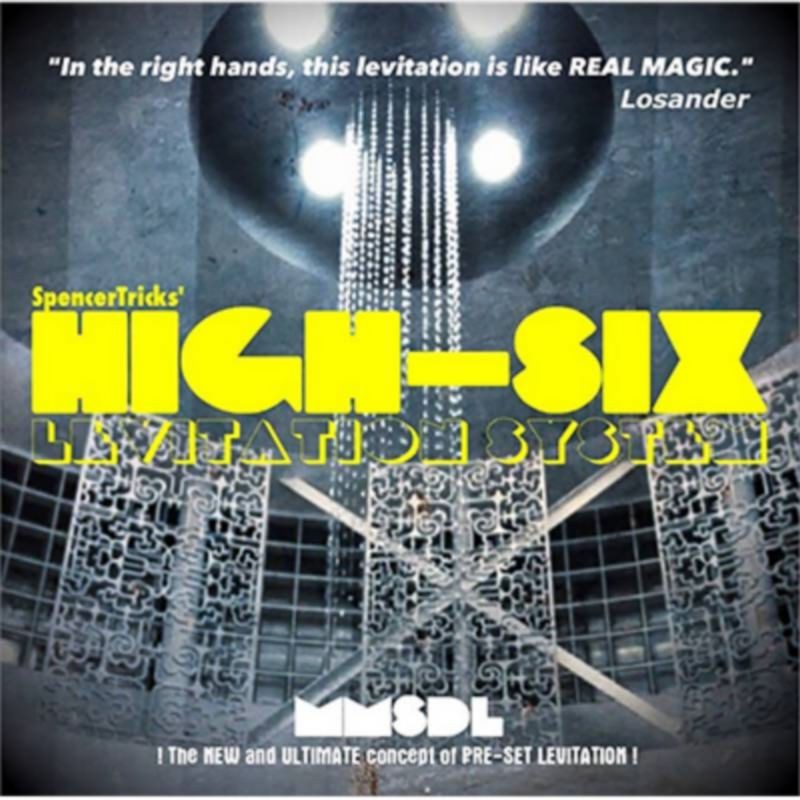 "In the right hands, this levitation is like real magic." - LosanderThe brand new and highly practical concept of pre-set levitation!You borrow a bill from your

"In the right hands, this levitation is like real magic." - Losander

The brand new and highly practical concept of pre-set levitation!

You borrow a bill from your spectator, you make it levitate. But that's not the end. You can move the floating bill freely, up and down, left to right. Then you let the bill go, it stays floating at the space that you let it go. It looks so weird as the gravity doesn't exist. At the end of the performance, you grab the floating bill, walk through the space the bill was just floating, hand it back to your spectator!

Since High-Six is the pre-set levitation system, it takes 10-15 minute for the set-up. But once you set it up, you can perform incredible levitation hundreds of times with the system.
The High-Six system is also "Break-Proof". Because of the unique construction of the system, it's hard to break.
Since there's nothing set up on your body, you can walk away from the floating object. You walk away from it, walk back to it, grab it, hand it back to the spectator.
High-Six system is easy to set up. You don't have to take care about the system in your daily life, but when you need the system, you can get it ready in 1 second.
Since it's not the body set levitation, basically you can perform any kinds of tricks at the same space you perform High-Six. You can perform ultimate levitation at any timing during your show!

High-Six is not for walk around and table hopping, because it's pre-set system. If you're a professional performer doing bar performance or parlor show, this is one of the strongest pieces of magic. If you perform it, you will be so surprised by how easy the handling is compared to the effect!

This is one of the most visual levitation enabled by practical & devious method.

You need invisible thread and magician's wax to do this trick. Vectra line and hard type wax is recommended.
You can get the other props you need to construct the system easily in your house and stores.

The review from David J. Greene:
"Spencer Tricks High Six is a great levitation system suitable for a parlor or stage setting. What makes this system different is the ability to move and suspend an object in the air at different points. You can levitate an object, and move it to the right, or left, higher, or lower. You are in complete control. You can even walk away from the object (a funny bit would be to walk away from the object, stop, and go back for it, almost like you forgot about it). The set up takes minutes, and once in place, can be used over and over. Great for repeat show!"