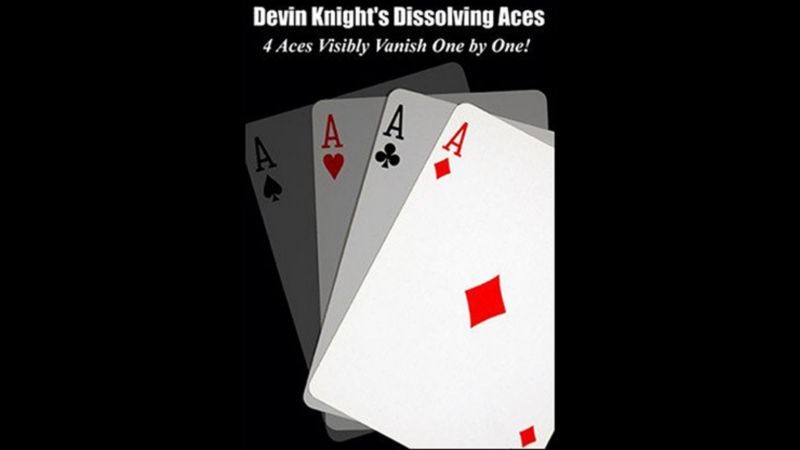 One of the BIG hits of Devin Knight's recent lecture tour. An effect that left many magicians with their mouths open as they witness the incredible vanish of four aces ONE BY ONE. The effect is done with just the four aces. They are not gimmicked in any way. The rest of the deck is set aside. Only the four aces and your two hands are used. Show four aces front and back and freely count them. A little squeeze and one ace vanishes, leaving three cards that are dealt out. Show three aces, square them and give the packet a squeeze. Now there are just two aces left in your hands. The last two aces are shown very freely and placed between your palms. Another squeeze and only one ace is left. Squeeze the last ace between your hands and it too vanishes leaving only two empty hands! For a climax the deck set aside is spread face-down and the vanished aces are seen to be face up in the middle of the deck. This effect has baffled many informed magicians as the vanish of each ace appears impossible and is totally invisible even when you know how it is done! Directions also show you how to make a credit card visibly vanish from your hands without the aid of any pulls. Very baffling and a stunner to use at a restaurant. NO GIMMICKS...No Sticky Stuff. Just any four Aces. Use a borrowed deck. One of the most visual and magical card effects you will ever see. "Devin Knight's Dissolving Aces is a deceptive, and very mystifying routine. A Killer!"- Tom Craven "Having seen Devin perform and demonstrate "Dissolving Aces" at his lecture for I.B.M. Ring 50, I can attest that this is one of the cleanest and most baffling pieces of close-up magic you'll ever see."- Dick Christian, Linking Ring Reviewer "...a strong and visual trick...This is a great routine for a table-based card set."- Wayne Kawamoto, Magic & Illusion Download now!