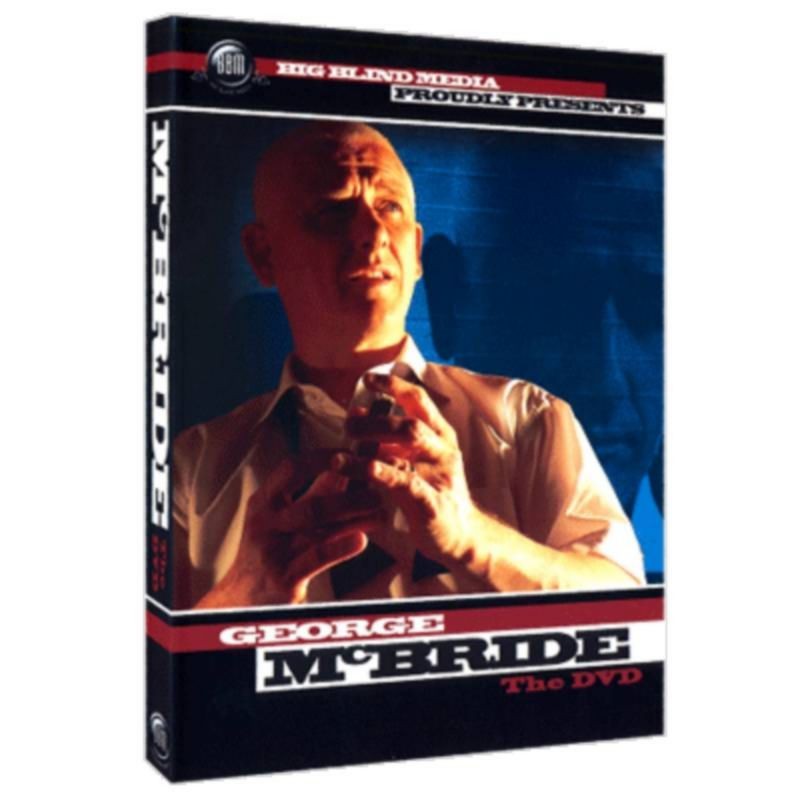 FINALLY legendary Scottish magician George McBride has made a video. And it's a scorcher. George is notorious among his fellow magicians as a cardman of devasta

FINALLY legendary Scottish magician George McBride has made a video. And it's a scorcher.

George is notorious among his fellow magicians as a cardman of devastating calibre. (Indeed, he is part of the underground Scottish Magic Mafia alongside luminaries such as Peter Duffie, Jerry Sadowitz, Roy Walton etc). And on this video you'll get the chance to learn eleven of his very best routines.

But not only that - you'll also get instruction in some of the most lethal moves in card magic.

This could not be any further away from the 21 Card Trick and your Uncle Barry and his badly remembered card tricks from the back of a breakfast cereal box.

This material is truly jaw dropping.

Ace De Triomphe - the four Aces are caused to vanish, one at a time. They then re-appear in a variety of spectacular ways. This is George's handling of Marlo's Vanishing Aces from Mint, and it's a BELTER!

Bar Room Blues - three freely selected cards change colour one after the other. Oh, and then the entire deck does too!

Cutting The Aces - a 'George-Clooney-smoooooooooooooth' way to cut to all four aces.

Open Assembly - you have all seen the classic Four Ace Assembly. Well, NOT like this! No extra cards and a killer ending that will have magicians fighting with punters to retrieve their jaws from the floor.

Reversal Of Fortune - This is the only non card item on the menu, and what a feast it is. Four Coins and only two cards are used. Basically, the coins vanish one at a time and reappear under one of the cards until all four coins are under the 'leader' card... or are they? Just when you think the routine is over, all four coins instantaneously appear back where they started. And all without any cover other than the two cards.

Hotel Mystery - a fantastic 'story' plot that builds to a cheeky climax. It's easy, it's engaging and it'll make you look suave.

Discrepancy Assembly - a Four Ace Assembly, but this time only using four kings and three indifferent cards. Think of it as an Ace Assembly with an eating disorder.

Flight Path - four Aces, signed by the spectator, vanish one at a time only to re-appear in the performer's pocket. This is a mountain of magic in five minute slot. If this was the only effect you performed all night, you'd STILL be the talk of the town.

Triola - three spectators each choose a card (or one person can select all three cards if that's your bag). Two Kings are now used to find the selections. The first card is caused to magically appear between the Kings. But what about the other two selections? Well, the Kings have somehow changed into them! Badda-bing!

Bonus - The Twist Shift - a shift that will blow your socks out of your nostrils. It's smooth as silk, as invisible as intelligence in a Big Brother contestant and available on video for the first time.

George McBride The Video is a masterclass in routining, sleights, sleight of hand, misdirection, audience management and general, all-round COOLNESS. Are you ready to take your magic to the next level?

"I loved this collection and can hardly wait for more!"
-Richard James, Connoisseur Conjuring Forum

"Although I am not a video guy, this is one of the best teaching videos I have ever seen."
- Larry Horowitz

"Having read and admired George McBride's material in places like Five Times Five Scotland, it is a real pleasure to see him in action. He is the Scottish Underground Man. There are several of his routines I'll be working on. His 'Twist Shift' and tips on the Second Deal alone are worth the price of the video."
- Matthew Field - Editor, The Magic Circular

"This is a must have video. I can hardly wait for George's second video."
- Harvey Rosenthal

"The only other video this year that made me sit up and bark was David Stones'... this is as good, but without the pretentious or poncey attitude."
- Seige, talkmagic.co.uk