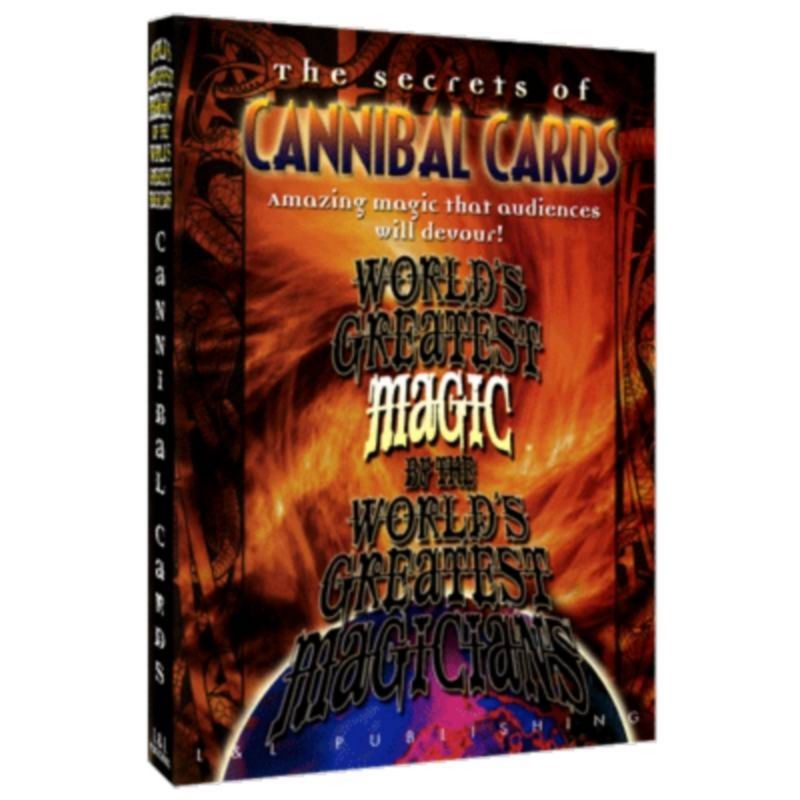 The Cannibal Cards plot was devised by Lin Searles in the late 1950's and this decidedly unusual plot has been capturing the imaginations of card magicians ever since. The original Searles approach utilized special cards. You'll see seven pasteboard masters, each with their own individual spins on this now-classic effect where a succession of playing cards seem to disappear when placed between other cards, apparently eaten by the "cannibal" cards - and all use ordinary cards.

Michael Ammar begins with the classic plot combined with Frank Garcia's "Apex Aces" and a "collectors" finish that provides three minutes of solid entertainment while Bill Malone follows with a typically hilarious presentation and a few red herrings thrown in that are guaranteed to even fool magicians. Juan Tamariz turns the trick into a piece of magical theater, complete with audience sing-alongs while J. J. Sanvert follows the classic plot right up until his amazing surprise ending. Larry Jennings, as would be expected, offers a classic and elegant handling while Michael Skinner demonstrates the version he used for over 25 years while he was the magician in residence at the Golden Nugget in Las Vegas. Finally, Eugene Burger presents a streamlined rendition that will, again, mystify everyone but particularly those who are familiar with the original, classic handling.

Since its conception, the Cannibal Cards plot has been a favorite of magicians and their audiences. As Dan Huffman observed in The Linking Ring, "And, why not, when one considers the delightful combination of snappy card magic and the consumption of raw, human flesh."