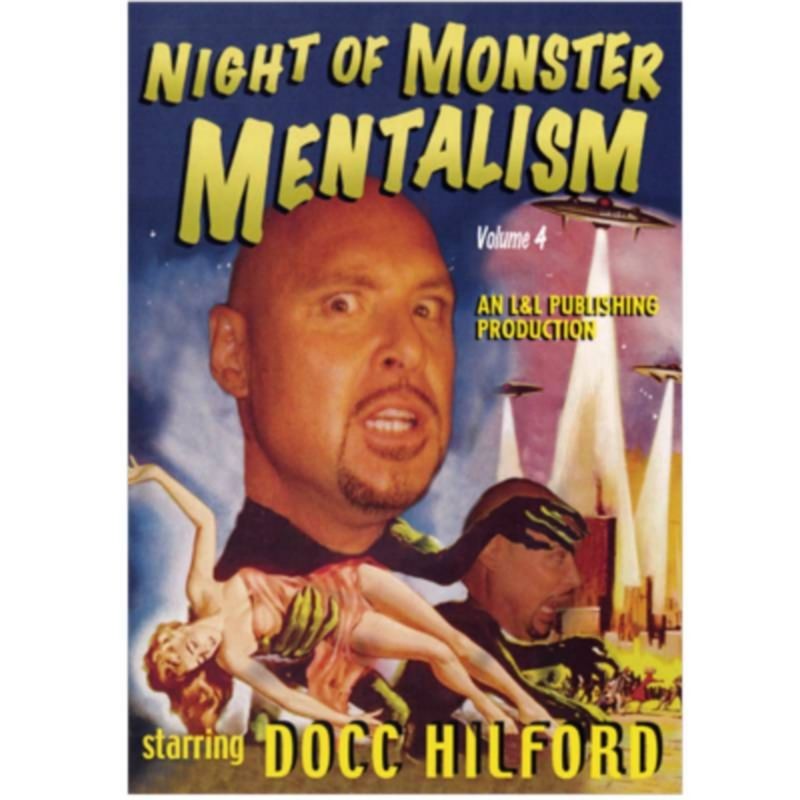 It's a dark night when audiences scratch at your door . . . demanding actual entertainment. A single taste of your new mentalism isn't enough. They need more! F

It's a dark night when audiences scratch at your door . . . demanding actual entertainment. A single taste of your new mentalism isn't enough. They need more! Following you on the street, reaching through the hallways of restaurants or even breaking thewindows of your own home, what will you do when they cry for MONSTER MENTALISM?

Docc Hilford is the crazed creator of the renowned Cassandra Deck, author of over 30 books on mentalism and consultant for a dozen television shows. He's joined by professional mentalist David Alexander to discuss the psychology behind each piece. Monster Mentalism is an astonishing collection of useable effects and the diabolical methods that have made Docc Hilford infamous.

Impossible Choice - What's crazier than a mad street performer who sneaks off to a deserted coffee shop, transforms himself into a mutant half-mentalist, half-jellyfish and attacks college kids with his razor-sharp deck of death? Not much!

The Great Magazine Test - Like the pounding of your heart . . . book tests . . . book tests. . . BOOK TESTS! A far as a man can run, he can't escape the unremitting beating of ubiquitous book tests. There's only two ways out - either a razor to the wrists or the gentle love of a magazine. In this test, two people share more than mere words; they share a night of insanity.

Number of the Beast - The ancient Egyptians knew the accurate, undying vibrations of numbers. The teachings of the adepts, long hidden in the dusty tombs of the past, are now revealed in a demonstration so direct, it's impossible to understand.

It's Personal - Meeting new people is simple. But be careful. The night is filled with strange people. When one unsuspecting woman reads a personal ad, she finds that someone knows more than her selected card, he knows everything about her! A chilling example of depraved psychic phenomena ripped from the pages of your local newspaper.

Killer on Tiber Street - A relentless, psychotic killer is pursuing innocent prey. The police are entirely bewildered because the slayer randomly selects his unsuspecting victims from a telephone book. Only you can use psychic abilities to discover the victim, decipher the address and prevent the murder; but will you be too late?

Invisible Dice - In the world of fast gamblers and loose women, there's a secret tool that everyone desires. Rare and beautiful, when possessed they ensure wealth, power and all the luxuries that come along for the ride. Maybe you'll find the . . . INVISIBLE DICE!