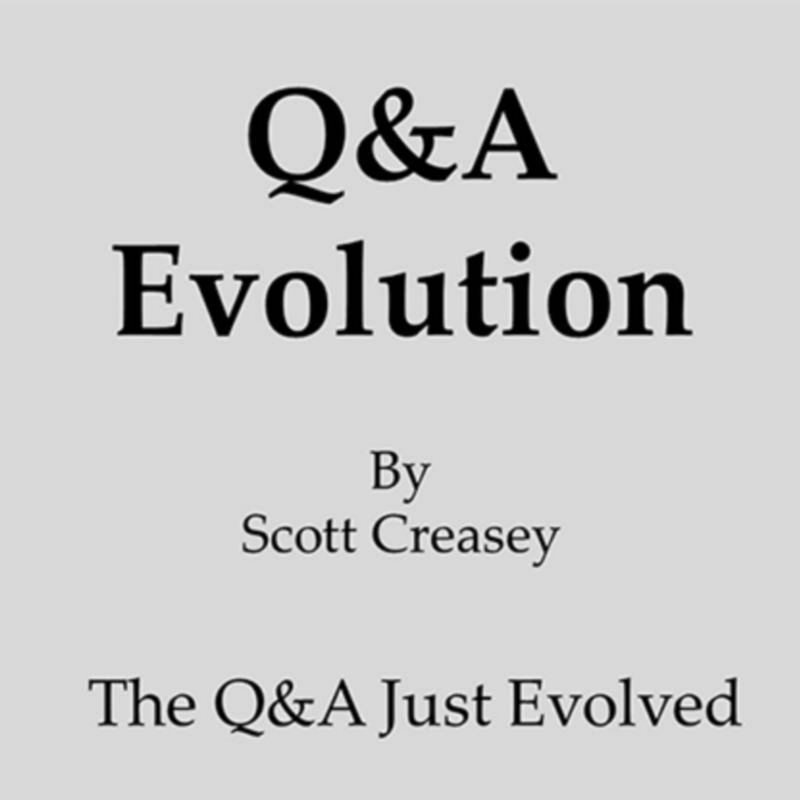 Q&A Evolution is a system that evolved over seven years of constant use in cabaret clubs along the Costa del Sol in southern Spain. It is a practical one-pe

Q&A Evolution is a system that evolved over seven years of constant use in cabaret clubs along the Costa del Sol in southern Spain.

It is a practical one-person real-time system for gaining access to written audience questions without the use of electronics, stooges, assistants, pre-show or any complicated moves.

The simple props are available from any stationery store and the set-up takes about half an hour. You're able to perform a full Q&A routine from the stage, cabaret floor or even close-up for small groups.

But there is more! The system is so versatile, it can be used for one-to-one readings and, as an added bonus, Scott has also included his method for performing Ted Annemann's Fourth Dimensional Telepathy.

"Scott has put together a compact Q&A routine that basically fits in a pencil bag... or your pockets. You could be dropped in any city and walk into a dollar store and put this act together for under ten dollars. If you are into readings, such as tarot or numbers, then this is up your alley. Plus, and I believe this is worth the price of admission, he gives you his version of 4th Dimensional Telepathy using this method. Scott always puts out professional killer ideas and routines. Amazing stuff!"
- Greg Arce

"One hour, thirty-four minutes of detailed, step-by-step explanation of how to do Q&A close-up, in a cabaret or on stage, using Scott's ingenious Q&A Evolution system. This is really a power-house method and system! Those who study and apply Q&A Evolution will have the ability to perform a full Q&A routine most anytime, most anywhere.
"All of the materials needed can be purchased at any dollar shop for $5.
"The download does not include a full performance of a Q&A routine, but does cover all of the moves and steps in great detail. Scott does provide a bonus video performance (and full explanation) of his 4th Dimensional Telepathy using the Evolution system.
"My best purchase of the year by far."
- Stunninger (The Magic Cafe)

"You can grasp everything in the first watch, but it will take practice to be done flawlessly. From the way he handles it, it is obvious that Scott has been doing it for a long time. Every move and the psychology behind it is explained. The 'pull out display' is very disarming because there's a reason for it and the display itself shows that nothing dirty happened even though it happened. The way the stack is handled is also very natural thanks to the anatomy of the entire thing going on here. The entire structure when you put it all together has aspects that will make your head spin with ideas for a Q&A act and for the core method here. The method is so flexible it can be done to 1 or 100 people."
- Max Hazy

"Just watched Q&A Evolution again. Man, is it packed with subtleties and insights from someone who has been doing Q&A for 20 years.
"Also made up a set of the Evolution cards and have been practicing the moves. It doesn't take long at all to get the moves down smoothly. Everything takes place in your hands, right in front of the audience. And in the case of a one-on-one reading, literally right under their noses.
"The combination of the Q&A Evolution system cards and the readings framework Scott teaches allows you to do unique, one-on-one readings for one person, or many.
"The more I work with this system, the more I like it."
- Stunninger

"I was impressed with Scott's Hanussen's Demise, but Q&A Evolution blows it away. It's very, very good."
- The Magic Cafe

"I just completed my first viewing of the content and I'm EXTREMELY impressed by this system. It's a 'WORKER' in every sense of the word! This is typical 'Creasey' - if you're a fan of his previous releases, this won't disappoint you in the slightest."
- Drew

"Awesome! I was out after dinner last night and did a Q&A Evolution reading for a woman and her friend. She asked if I do private parties, which I do. She went on to say how she'd love to book me for an upcoming party she's planning. I'll be carrying a stack of Q&A Evolution cards wherever I go from now on."
- Stunninger