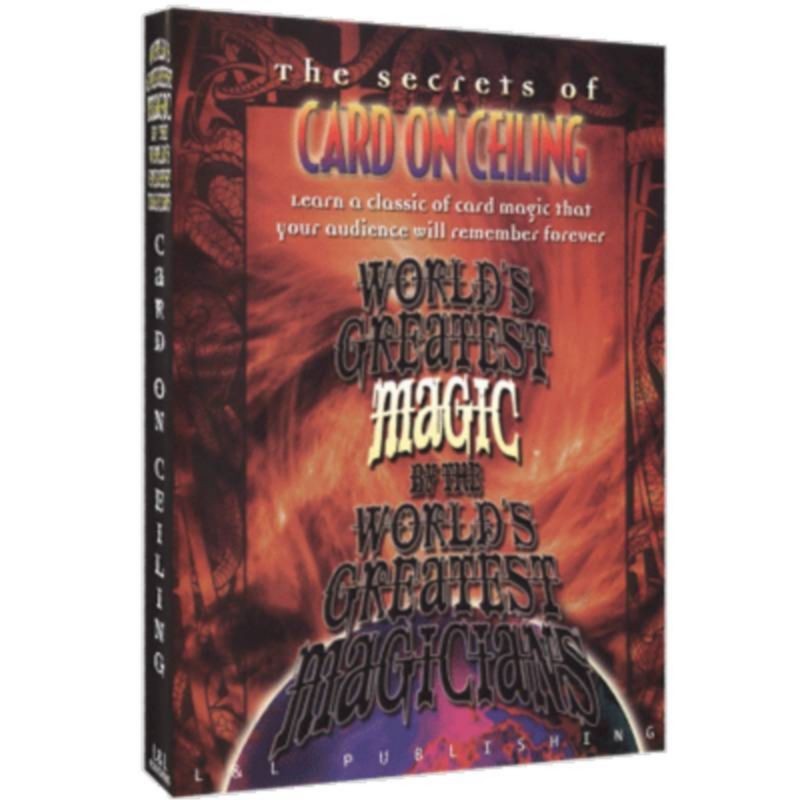 The Secrets of CARD ON CEILINGLearn a classic of card magic that your audience will remember forever.If you could have one set of magic, this would be it! This

The Secrets of CARD ON CEILING
Learn a classic of card magic that your audience will remember forever.

If you could have one set of magic, this would be it! This benchmark collection features just about all of magic's most enduring and classic effects and routines. It's a fabulous compendium with many of the top masters in the world of magic teaching their handlings and routines for some of magic's classics. Linking rings, sponge balls, metal bending, cups and balls, thumb tips, Zombie, color-changing knives, and many, many more topics are all gathered in this one terrific reference set. Each volume covers a specific subject and features new, old, and sometimes rare footage by some of the top video producers in magic.

In the early part of the 20th century, legendary bar magician Matt Schulien threw a deck of cards against the wall of his tavern and left a spectator's selection stuck in place. Little did he realize that he had created one of the most memorable and dramatic card tricks of all time. Since then, magicians have aimed their sites a little higher - ceilings, to be exact - and have been amazing and mystifying audiences with one of the very few card tricks that has such a huge, built-in "wow" factor.

On this volume, you'll meet five modern-day practitioners who have all made important contributions to the evolution of the Card On Ceiling. Doc Eason shows you how to make this trick play for large groups, drawing in all of the spectators into this very magical experience. You'll learn all of the fine touches in J. C. Wagner's version of the trick that's used by bar magicians everywhere, including Doc Eason. Karl Norman performs and discusses the version that he performed for 40 years at the legendary Forks Hotel and Michael Ammar teaches his take on this classic effect, one that helped to forge his reputation in the world of magic. Lastly, Scotty York, in addition to his very funny and clever presentation of this trick, will demonstrate how to make a gimmick that will enable you to streamline its handling.
Card On Ceiling is a trick that people will talk about for years... and on this video, you'll meet the gentlemen who can ensure that you'll be the magician your spectators will always remember.