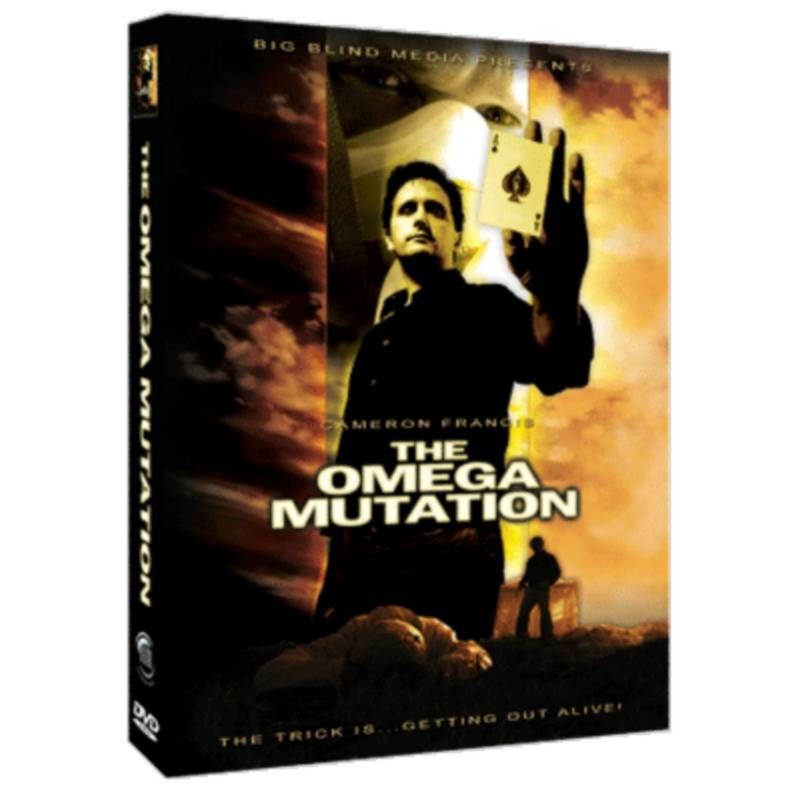 27 real-world effects from the hottest magic newcomer in years in a 3 video set that will blow you away! Almost 5 hours of practical, mind-blowing close-up magi

27 real-world effects from the hottest magic newcomer in years in a 3 video set that will blow you away!

The Story: October 18th 2007, 2.08pm. Distress calls are received at Heathrow Airport from an inbound 'Boeing 747' from Florida. The pilot, three crew and twelve passengers have been struck down by a mystery illness. By the time the plane lands, 7 people are dead. Only one man, an American citizen named Cameron Francis, disembarks the aircraft without showing any symptoms of the deadly bug. He is immediately arrested and quarantined in a secret location where he remains completely oblivious to the chaos that is unfolding as the mystery virus sweeps the UK.

Interrogations of the suspect have revealed nothing. Francis refuses to admit any connection to the vicious and deadly strain now dubbed the Omega Mutation by leading scientist's frantically working on an antidote. Francis is either an unwitting participant in a deadly game, or a criminal mastermind of heroic proportions. Either way, his story is sketchy. Claiming to be a close up magician, he carries with him a small attaché case filled with cards, coins and other magical paraphernalia. Needless to say, his attachment to this questionable practice only serves to raise suspicion of his involvement in what could be the single most disastrous event that the world has ever known!

"... one of the most creative magicians that I have met in a long time."
- Richard Sanders

"Cameron's magic is captivating and full of surprises. You will like this material!"
- Aldo Colombini

Vivid - The torn corner of one selection mysteriously appears taped to a second selection. In the blink of an eye the first selction restores itself. It's madness I tell you.
Insecure Restoration - A new twist on David Williamson's "Torn and Restored Transpo".
Cagey - A stunning transposition with an ending that will slay your spectators. This is a beautifully constructed routine,that engages as much as it amazes.
Everywhere - A signed selection multiplies, disappears and reappears under impossible conditions.
Dime-A-Cap - A new twist on the coin to pen cap. Indeed, with just a pen and a coin you can have a really beautiful moment of magic.
Triumph Transpo - The name says it all... no, it does. it really does.
Signed & Assembled - Three signed cards to card box. Super clean and super easy to do.
Back In 10 - A freely selected coin (yeah, right!), disappears and ends up taped to the back of a signed business card. You could give that away you know. Like some kind of souvenir / advertising ploy. Genius.
Hard Knocks - A completely impromptu signature transposition like no other.

Assembled Reset - Four jokers assemble and then instantly backfire into their original positions. Highly effective and the handling is a breeze.
Card-A-Que -A selection is charred with a lighter and restored in an insanely visual fashion. This is the kind of magic that people talk about for months after the event. And it's EASY!
Appearing Sharpie - A 'no sleeves required' miracle. One second you are holding a pen lid, the next it's the pen has appeared in the lid. Hence 'Appearing Sharpie'. Obviously.
Bill Switch - The $100 Bill Switch explained in detail.
Cheque This - A three phase routine created with the table hopper in mind. A borrowed bill turns into an IOU cheque. Then a selected card is shown to have been predicted on the cheque. And then, to cap it all, the bill reappears inside a card case that has been on display the entire time.
Last Laugh - Four jokers capture a selection. The selection then becomes a joker and the four jokers become the selection and its mates. Bang - your spectators are on the floor. You're laughing manically because this is easy-peasy!
Yours & Yours - Words on a piece of paper disappear. Where did they go? Let's check these two selections. Oh look - those 'vanishing words' have appeared on the back of the selections. Weird.
Separation Anxiety - Oil and water with a twist. Like Gin 'N Tonic with lime juice. Except without the alcohol. Or the tonic. Or the lime.
Stuffed - Two kings capture two selections under impossible conditions.

Ring Flight - A reel-less ring flight that's big on impact and easy on sleights. You'll be using this one folks. Believe us! No gaffs, just guts!
Jumpy Collectors - Three jacks collect three selections one at a time in an increasingly impossible manner.
CF Switch - A utility card switch with loads of possibilities.
Visiting Hour - An amazing "Visitor" effect that is perfect for table hoppers.
Connections - A super clean Do-As-I-Do effect with an incredible climax.
Hofzinser Takes A Dive - The Hofzinser Ace Problem turned on its head.
Space Available - A blank faced card takes on the image of a signed selection under incredibly fair conditions.
Dupes - An amazing small packet effect with loads of magic and an instant reset.
International Cards Of Mystery - You write a prediction on a bank note. Then you allow your spectator to chose from a packet of cards - each of which has a different city on the reverse. Their freely selected city is found to be on the reverse of the same card you predicted on the bank note. But wait - you can't spend that bank note in that city. Solution - you visibly change the currency to match the city!