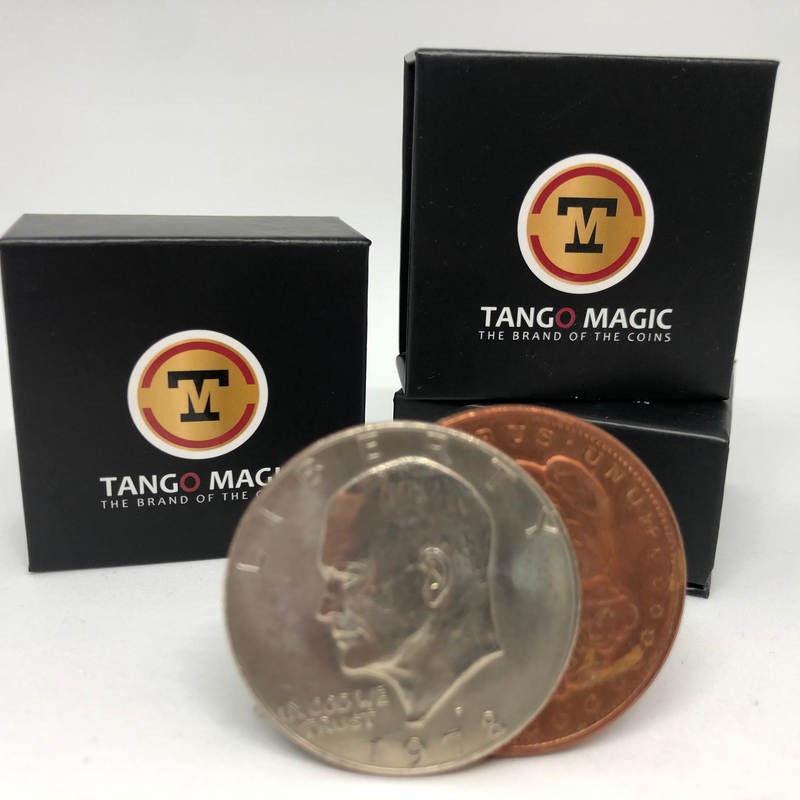 Think ONE DOLLAR coins, think performing the same kind of miracles with the biggest coins. Tango

Think ONE DOLLAR coins, think performing the same kind of miracles with the biggest coins. Tango Magic, the winner of the Invention Award FISM 2012, introduced a special line combining One dollar Eisenhower and a beautiful Copper coin (copper Liberty).

Now you will have Copper and Silver, Scotch and Soda and Hopping half in Eisenhower one dollar size.

Effect 1 The magician shows a COPPER COIN and an ONE DOLLAR in the left hand. He closes both hands and when he opens the left only the COPPER COIN can be found because the ONE DOLLAR has appeared in the right hand!

Effect 3 The magician shows two coins; a COPPER COIN and an ONE DOLLAR, and places them on a pad or tablecloth. He then waves his hand over them for but a second and uncovers them only to find one coin! When he lifts the pad/tablecloth, the ONE DOLLAR is revealed!!

In this package you will find a finely crafted gimmicked coin set produced byTango Magic. Tango Magic produces the highest quality gimmicked coins in the world. Tango stands behind their products to guarantee your success. As a bonus to thank you for your purchase, Tango has included in this packageTangopedia, a four-hour instructional DVD. This DVD includes basic instructions for more than 50 gimmick coin routines using a variety of our specialty coins such as Expanded Shell-Coins, Copper/Silver/Brass, Scotch and Soda, Pen Through Coin, Folding Coins, Okito Boxes, and more. From this DVD you will learn the basics of using your new Tango Magic products as well as gaining insight into the amazing of possibilities the Tango line of coins provides.